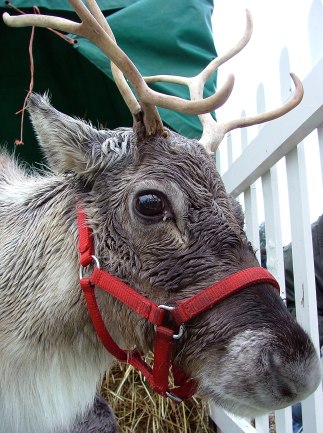 Jack’s a reindeer. Like all reindeer, Jack has one goal in life: to be famous. When he was just a little calf, he dreamt of becoming like his old favourites: Dancer and Prancer, Donner and Blitzen, Comet and Cupid too. He imagined himself stood in front of Father Christmas, the conductor for their biggest performance of the year. He always thought he’d be in the front row, guiding the way, looking down on his own little excited calves and waving with pride. Except life hasn’t turned out that way. Jack is getting on a bit now and he hasn’t achieved his goal. He isn’t famous, and he’s never pulled the magnificent sleigh. He’s never even seen the sleigh, let alone met Father Christmas.

Despite that, he never lets himself deflate like a balloon, feel flat as a pancake, get down in the dumps, or any other cliché either. He just keeps trying. A determined little mite, he is. Every time someone suggests something different – a new way to become famous or catch the attention of Father Christmas’ scouts – Jack tries it. He’ll try anything. That’s why he had the surgery.

That’s right – Jack is no longer au naturale. He’s had cosmetic surgery. On his nose. This is what Jack looks like now:

He says he had to do it. He couldn’t get any Christmas gigs, no matter how hard he tried. He put baubles on his antlers, he flew around the room, he danced a little jig, and sang a mighty song but nothing worked. They always wanted something different, something he never had.

“No, sorry. We’re looking for someone with…maybe a red nose?” they’d muse.

“You know, everyone wants Rudolf at Christmas, and a red-nosed reindeer is next best thing. Ever considered having surgery?” they’d suggest.

So after hearing the word ‘NEXT’ being screamed over and over, he finally did it. He bit the bullet, he jumped straight in, he went for it. He had his nose surgically enhanced. It’s big, it’s red, it even glows. Everything you could possibly want from a nose then, when you’re a reindeer. He could barely contain his excitement.

Once it wasn’t so sore, the scars had healed, and he thought the redness from the surgery had died down (it was difficult to tell, you see, what with the general redness of the nose), he went out to show off his new feature. He went to auditions full of happiness and excitement. This was going to be his time! Except it wasn’t. It didn’t turn out like that.

“What are you, a Rudolf impersonator or something?” one agent said with scorn.

“Stop copying Rudolf! Get a personality of your own! Be original!” a producer said with disgust.

“Been there, done that, time for something new,” another said.

“The unrealistic body standards in the industry,” he says, “are getting harder and harder for a reindeer to meet. You’re never good enough, no matter how much your nose glows.” But he still tries, does Jack. He may have carved himself up like a piece of meat to appease an industry that will seemingly never be appeased but he doesn’t give up. He won’t have any more surgery for a while yet though. His family still don’t quite recognise him when he’s in the street.

Maybe Christmas is out of the question now, he thinks, but at least I should get a gig or two for Comic Relief!