Posted on October 4, 2017 By Elaine Chissick 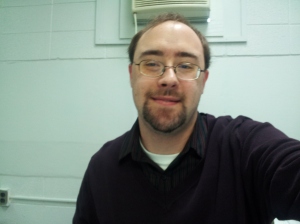 Hello, Jeff Cunningham, American author writing as J. D. Cunegan, a series of murder mysteries featuring the character, Jill Andersen. Welcome to my blog. Please, can you introduce yourself and tell us a little about yourself and your books?

Thanks for having me! I write under the pen name J.D. Cunegan, and I am the author of the Jill Andersen series (Bounty, Blood Ties, Behind the Badge), a series of murder mysteries that also borrow heavily from comic books, superheroes, and science fiction. Jill Andersen is one of the brightest homicide cops in her hometown of Baltimore, Maryland, but she is also the costumed vigilante Bounty, and her powers came from a clandestine scientific experiment named Project Fusion which gave her cybernetic enhancements (such as increased strength, agility, healing, etc.). She must perform her day job, which increasingly threatens to reveal her secret identity, while ensuring her arch nemesis, shady billionaire David Gregor, doesn’t wind up ruining her life. I am currently working on the fourth and fifth books in the series, Behind the Mask and Betrayed, both of which I plan to release this year. I’m also working on a standalone fantasy novel, titled Notna, that I hope to release later in 2017 – as well as a supernatural thriller titled The Keeper and a political thriller called The Pen is Mighty.

What, or who, inspires you?

Comic books were my first inspiration; since I discovered them when I was 11, I decided I wanted to create. For the longest time, I wanted to work in comics, but as I got older, I became a much better writer than an artist. So now I’ve turned my stories into novels, because ultimately, these stories need to be told – and I didn’t want to let the format dictate whether or not that happened. Stan Lee is a big influence on me, as is Joss Whedon – because I discovered his TV shows Buffy the Vampire Slayer and Angel during a creative dark period, and those shows inspired me to start creating and writing again. Without those shows, I’m not sure my books exist today.

Do you enjoy reading the same genre as the one you write in?

I think you have to; I don’t know too many writers who don’t enjoy the genre in which they write. That’s not to say I don’t enjoy other genres; I’ll read just about anything, so long that it’s good. I think a good story and good characters are more important than any label or restriction placed on them. That said, I’m a big fan of genre mashups, because a lot of times, those sorts of stories can buck established trends and turn tropes on their head, resulting in truly satisfying stories. Everyone’s so eager to think of the next big original thing, which I think is an impossibility, but simply turning a genre on its head, or combining one genre with another, can create something wonderfully unexpected.

Has any of your research taken you to an unusual place?

I can’t say that it has. Most of my research centers around the city of Baltimore, making sure my depiction of it in the Jill Andersen books is as authentic as possible (I’ve visited the city numerous times, and I’m a lifelong fan of the city’s baseball team, but I’m not a native); since I’ve decided to set these books in a real location, I have a responsibility to be accurate in its depiction. I also research police procedure, though I do take some liberties there for the sake of expediency, and for Notna and The Keeper, a lot of my research has taken me down the route of pagan faiths and supernatural superstitions. If nothing else, that is excellent story fodder.

What are you working on at the moment?

I’m currently writing Behind the Mask and Betrayed, the fourth and fifth novels in the Jill Andersen series. Behind the Mask should be out sometime around May, and I hope to have Betrayed out by the end of 2017. I’m also working on a standalone fantasy novel, titled Notna, that I hope to release later in 2017 – as well as a supernatural thriller titled The Keeper and a political thriller called The Pen is Mighty. The latter two will probably be ready for release sometime in 2018.

What are your future writing plans?

I don’t have a set number of books in mind for the Jill Andersen series; those books will continue as long as Jill continues speaking to me as a character. I first created her over 20 years ago, and she has always been my favourite personal creation… so I don’t see myself not writing her any time soon. As of right now, Notna, The Keeper, and The Pen is Mighty are the only non-series books I have planned, but that could change – because there are always stories to tell, and I like to challenge myself by writing genres and stories I’ve never tackled before.

Is there anything you don’t like about writing/being an author?

Marketing. Marketing, marketing, marketing. I really wish I could completely outsource that one aspect of being an independent author. Trying to get noticed in a sea of writers and books is far more difficult than I anticipated, and often it feels like nothing more than banging my head against a wall. I love writing, I even love editing and re-writing. But trying to drum up attention and interest… I’ve yet to find a strategy that truly works, and it is beyond frustrating.

Tea or coffee? In the morning, coffee (must be hot; I can’t stand iced coffee). In the evening, I love a hot mug of tea.

Sweet snack or savoury snack? I have a definite sweet tooth.

Real book or ebook? All things being equal, a physical book every time. But ebooks are quite convenient in their own ways.

Cinema or DVD? DVD; I’m an introvert and often don’t have the time or energy to go to the movies.

Weepie or action movie? Action movie. I get more emotional over TV shows than movies.

And to Finish, What is your favourite …

Food? Pizza with bacon on it, chicken wings, and Caesar salad with shrimp (not all at once).

Saying/Proverb? “There are two kinds of folks who sit around thinking about how to kill people: psychopaths and mystery writers. I’m the kind that pays better.” – Richard Castle

Song? Either “BYOB” or “Revenga” by System of a Down.

Many thanks to J. D. For more info, you can find J. D. at https://www.facebook.com/JDCunegan

Elaine R. Chissick ~ Wife, mother, and step-mother with a passion for writing. I have three books out on Kindle at the moment and two in paperback. One is a true story and the other two are fiction novels. I am currently working on a few new projects. I’m also one of the authors who contributed to the charity book, “Look 4 Books Medley of Short Stories”
I have an eclectic taste in music, I like to cook, and I think that my cat has the most fabulous green eyes I have ever seen.
For more information, check out my website: elainechissick.wix.com/chissickchat