HORROR: The Curse of Time by Riley J. Froud 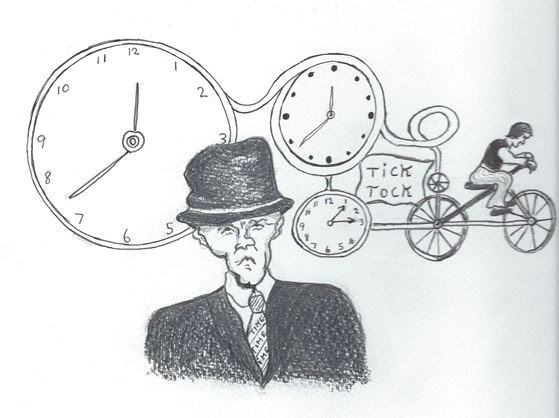 Today was four years long.  Not metaphorically of course.  Literally.  Each second stretching on for twenty four minutes, each minute lasting just over a day, each hour ballooning into two long months.  Tomorrow – well, tomorrow will be four years too.  Four long years, but that’s tomorrow and at least I get a good long sleep in between.

The day does not repeat, as you may expect.  Today, I did not experience the same day over and over for years, but instead my day was elongated, protracted, extended, strung out.  Unfurled, much like my mind and the madness that now resides inside it.  It’s a curse.  Time is a curse, I’d said in my usual flippant way, and now time has become my curse.  I said it to the wrong person, in the wrong place, at the wrong time.  Huh – the wrong time!  Now all my time is wrong.  Slow-moving, like a decrepit old snail on Valium.

It wasn’t always like that.  I used to be sprightly.  A spring chicken prancing from here to there with the energy of a toddler on Christmas day.  One that’s been fed coffee and sweets and is overly tired.  My days whizzed by and I barely noticed them – a minute gone in a second, an hour disappearing by the minute.  The speed with which my life was vanishing was a scourge, a bugbear, my bête noir.  I would lament, in those dissipating seconds, about how little ‘time’ was doing for me, about how time, and the way in which it raced, was a curse.  How I never had ‘time’ to myself, as though time were some mistress with whom I could cavort at my will.  How I never had the ‘time’ to get everything done.  How ‘time’ was making my life insignificant and how difficult it was to live with its chasing, sprinting, dashing, running.  But all that changed two weeks ago.  All that changed eighty four years ago.

“Time is a curse,” I’d said with a sigh, not for the first time and probably not for the last, as I stood at the bar and drank down my cocktail.  Music blared, people danced, the bouncers watched, and all the while I drank, and lamented, and wasted the time I so fervently coveted.

“Time is a curse, you say?” a voice said behind me.  I jumped around – quickly, so as not to waste any of my precious seconds.  The man sat quietly, calmly, in a chair that had appeared as though from nowhere.  The rest of the club had vanished – all but me and the bar on which I leant, and the old man in the chair.  All around us, white nothingness.  He tilted his head and continued to stare as I looked on dumbfounded.

“Y…yes,” I managed.  I won’t lie, he frightened me.  Perhaps I am dead, I thought.  Perhaps my time is over already, what little I had to begin with.  Time is a curse, I thought once more.

“You’re not dead,” he said, reading my mind.  I nodded at this information, somewhat curious as to why I was not more overjoyed with my continued living status but I was numb, in shock, stunned.  “Why is time a curse?” he asked, his voice small and gentle but confident and wise too.

“It flies by too fast, I can’t keep up.  There’s so much to do and so much to see but time, it’s inconsiderate.  It doesn’t care.  It doesn’t allow me to be and do the things that I want to be and do.”  Words tumbled out of me, falling from my mouth and bouncing around with much the same speed as the seconds that flew by during the day.  “Time is a curse,” I said once more.

“I see,” the old man replied with a nod, a hand rubbing his chin in thought.  “I may be able to help,” he said and I looked at him with wonder – this, my saviour from time.  “Are you sure, absolutely sure, that you want time to slow down?”

“Yes,” I replied without hesitating.  What was there to think about?

“Be careful,” he warned with his eyebrows raised and a wrinkly old finger in the air.  “Don’t answer too quickly now, you need to think.  It may not be as great as you suppose.  Granted wishes rarely are, wishes are such throw-away things, given with little thought.”

“I don’t need to think,” I snapped before biting my tongue.  The last thing I wanted to do was offend this man who was offering to lift my curse.  “I’m sorry, I don’t need to think.  I’ve thought enough about time and the curse that it is.”  My eyes narrowed as I looked into the distance and considered my enemy.  His gently nudging cough brought my attention back to him.  “Please help,” I asked.  I even tried ‘puppy dog eyes’, if there is such a thing.

“Okay, it is done.  When you wake tomorrow, each day will be four years long.  Remember though, I warned you.”  With that, he vanished and my thumping heart was drowned out by the bass thumping of the music.  The roar of the crowd filled my ears and my eyes struggled to adjust to the newly found dark.

“Are you okay?” my friend asked, noticing my disorientation, although seemingly not noticing that I had been anywhere.

“Yes,” I nodded, I lied.  “I’m going home.  I’m tired.”  I couldn’t stay there.  I couldn’t decide whether the man was real or a dream, an hallucination – an effect of one too many cocktails, perhaps.

At home, before I slept, I wondered with joy across my face as thoughts raced through my mind.  Imagine what I could get done in a day, if a day lasts four years, I thought to myself.  I was over-joyed, thrilled even.  What a fool I was.

The old man was right, he didn’t lie, he didn’t cheat.  He slowed time as he promised and each day does indeed last four long years.  What he failed to tell me, though, is that I would slow too.  I am plodding and stagnant and lethargic.  I move and think and do at the equivalent speed to time, my slowed time – roughly 1461 times slower than before.  It’s like I’m wading through custard, thick and sludgy.  My words are long and slow like a whale’s cry – as are everyone else’s to my ears, although they seem not to have noticed any difference.  It’s my thoughts that are the worst.  They load into my brain at the speed of a 1990s dial-up internet connection, hinting at the first part but taking forever to complete – a sentence taking almost an hour to form, each new idea or concept taking months.  I am sluggish and miserable, each task taking an age to complete whilst I will myself, pull myself, drag myself along but the worst part of it all is that I am aware.  I understand.  I remember how it was before and I crave for the speed and the energy that I once bemoaned and deplored.  Inside, somewhere deep, I cry – slowly, of course, but I cry for the time that I’ve lost, the time that I’ve gained.

After the first day, the first four years, I cried and screamed and wailed in bed, begging the old man to make things right.  He appeared again, everything but me and the bed disappearing as before.  He looked smug, with a grin, as he stood a few feet away from me.

“Are you not happy, now that you’ve got what you want?” he asked, the hint of a smirk reaching his eyes.

“Please old man, help me make things right.  Take things back to the way they were,” I begged.

“I can’t help you with that,” he replied.  I thought I saw a sparkle of sympathy in his eyes, as unlikely as that may seem.  “Only you can end this curse.”  He looked at me deeply, as though looking into my soul.  “Only you can make this right.”

“It’s subjective!  It’s perception!” he shrieked.  “Learn to appreciate the time you have.”  He nodded like a wise old sage as he faded from existence, enjoying the mystery of his riddle as he returned my bedroom to me once more.

“Who are you?” I cried into thin air, tears streaming down my face, hands reaching up to tear my brain out of my skull in frustration.  A disembodied voice answered, booming through the room, my ears, my heart and my soul.