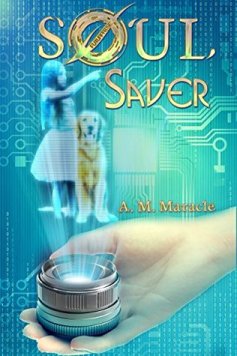 Soul Saver by AM Maracle is difficult to sum up in a few lines.  There is so much story in this story, but at an extremely basic level, it’s about a technology in the future that is supposed to bring the dead back to life (albeit in hologram form) but ends up doing quite the opposite.  It’s set in the not-too-distant future, where technology is king and social class segregation is accepted as truth.  It’s about betrayal and hurt, it’s about love and passion.  There are four story lines that entwine to create a remarkably complex plot.  In fact, it was a really hard story to pull off, but did Maracle manage it?

I wasn’t so sure at first.  It’s quite a long book – or at least, it felt like that to me.

At 25% in, I was only just beginning to be intrigued, but once I was there, I was there with a vengeance!  I wanted to know more about their technologies and their ways of life.  The social structure of Maracle’s world is somewhat reminiscent of Huxley’s Brave New World or perhaps Atwood’s Oryx and Crake – a world in which the rich, tech-obsessed elite live in barricaded, isolated, highly protected environments (in this case the ‘Fences’) and the poor are left to scrabble in the dirt and dinge of the outskirts (the ‘Ditches’ here).  The two worlds do not mix under any circumstances.  What’s most frightening about that is this concept of segregation is it’s so close to being true, with the distance between the rich and poor growing ever wider.

The use of technology too, Maracle’s ‘omnis’ which track your ever move and near enough dictate your life, is so real that it could be happening right now.  It’s easy to see how quickly we could descend into relying on that technology so easily.  In fact, it’s started already with mobile phones fitted with GPS trackers and everything you could possibly need, from cameras to calendars.  So the future that Maracle envisaged is, I believe, a fascinating commentary on where our current technology is leading us – and a stark warning to us all.

At 50% in, I started to get bored.  The set-up was massive (and now, having finished the book, I completely understand why), but I was worried that it was going to become a drag, that I wasn’t going to finish the book.  It seemed like the plot was going nowhere and I wasn’t sure whether I’d be getting to the end.  But I was still intrigued by the world and where it was taking us, so I carried on.

At 75% in, I’d forgotten I was reading and was completely sucked in!  It wasn’t until I reached the end and could breathe again that I realised what had happened and how engrossed in the book I had become.  All the threads that had been so carefully laid were now showing their colours and beginning to twine.  The twists and turns made my head twirl and there are some genuine surprises in the plot that had me gasping, and I felt genuine emotion for the characters that I had before thought nothing of.

In fact, the emotional element of this book is done remarkably well – until now, I’d never read a book that could make me feel so much sympathy for a child killer and for that, Maracle can only be applauded.  Don’t get me wrong, the narrative never condones the act or implies that it’s acceptable but it does spend time exploring the reasons and the psychology behind it, and that was both fascinating and well done.

At 100% in, I needed to take a breath and take stock of what had happened.  It ended with excitement and sorrow and joy all rolled into one, and Maracle’s use of an epilogue was a brilliant way of tying up the loose ends without making it look like she was putting a pretty bow on everything.

It’s true I had a little difficulty getting through the first 50% of this book and it’s true too, that the pacing of this novel could have been better – perhaps a little more of Foster’s history littered through the beginning chapters may have helped hook the reader and provide more balance.  But more than this, it’s true that this book is a genuinely enjoyable read, full of action, full of twists and turns, full of emotion, and most of all, full of important social commentary.  A good read, overall.