Maria Gibbs is the author the romantic novellas, A Lifetime or a Season and As Dreams are Made On.  See my review for the latter here.  She’s currently working on a number of pieces, as she’ll discuss below.

What inspires you to write?  Do you find that certain moods/states of mind drive you to write more?

Writing has always been a passion for me, for as long as I can remember I have always written. If I could, I would write all day. I don’t need to feel inspired to write, it’s all just sitting in my head waiting to emerge.  When I am on holiday, I write more. I go on holiday alone, a deliberate choice so that I can write.  Being away from the daily grind, the things that tire you out and just being able to relax makes the words flow faster. I love the release I feel when I have had a good writing session; it’s as though you are drained but in a good way.

You write within the romance genre, which is hugely popular.  How do you manage to stand out from the crowd?  Do you think it’s easier or more difficult to shine within a big genre like romance or in a more niche genre with a smaller following?

To be honest, I really don’t think about things like that which is both a blessing and a curse. I work full-time, so writing is not my form of income.  I suppose I can afford to write what I want to rather than consider what marketplace I should try to fit into. I write what is inside me, what needs to be written and so far that has been mainly romance. I have some works in varying stages of completion, one that is more of a thriller/romance another has no romantic content at all. I’m not sure what genre it would fit into: Set in Brazil, one baby is adopted by an English couple while his twin is left behind. His twin is less fortunate and grows up on the streets. Years later the couple return with their son for reasons that he doesn’t know, he discovers that he is adopted and has a twin. I’m saying no more…watch this space. I have also written a first draft of a children’s book. So all very random! I do wonder what will be left of me once all these stories escape 😉 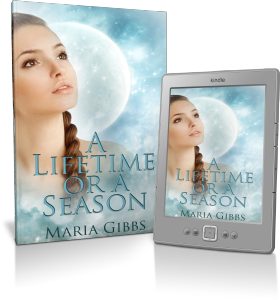 Both As Dreams Are Made On and A Lifetime or a Season are short stories.  Have you got any plans to write a full-length novel, or do you prefer to write shorter pieces?  What do you think are the benefits of writing shorter pieces?
I’ve been working on a novel for many years now; it is going through a word cull/edit. It started at 150,000 words; it is down to about 95,000 now. I met a guy last year, very inspirational who made me sit up and stop dreaming about being a published author. He suggested that I write some short stories to get my name out there. Prior to that, I had no inclination to write short stories and contrarily I don’t tend to read short stories. I have found though that the lessons I have learned in the ten months since I first self-published As Dreams are Made on have helped me significantly in the novel.

When I reached the end of both short stories, I felt as though they were complete. I have had a lot of feedback, however about both books from people who thought I could have extended them to novels or novellas at the least. I do plan to do that for both at some point, but that is on my ever increasing to be written pile (TBW). I do think it is significantly harder to sell shorter works and also to access some of the book publicity mail outs as often the criteria is set higher than the short story word count. I think I will certainly aim at novella or above in future.

Thomas Trevelyan, the man of Matty’s dreams in As Dreams Are Made On is

an intriguing character, with a supernatural element.  What inspired his creation?  Are you interested in the supernatural?

This will tie in with the next question somewhat. When my friend suggested I write a short story, I placed my hands on the keyboards with no idea what I was doing to write, pretty much everything that came out did so without me planning it which includes Thomas. I never base my characters on anyone I know intentionally but sometimes I get a flavour of someone in there which I see afterwards but Thomas isn’t anyone I know to any degree.

Thomas grew organically to a certain extent. Once the foundation had been laid that Matty had been drawn into this dream world, I had to figure out how meeting this enigmatic man would work? Who was he? How was he a danger to her? Was he a figure from the past? I love history and enjoy reading time slip novels, so I thought about how that could work. In the end I knew he couldn’t be what she thought he was. The educated peasant with a dangerous edge had to be a cover for something else. So the Demon was created. In hindsight and with the help of a very insightful comment from a reviewer I think I could have expanded more on his demonic side but maybe that will be where I can take it when I revisit them.

I can’t say that I am particularly interested in the supernatural although I do seem to be veering slightly towards it. I have a tiny excerpt that was prompted by a book promotion competition from another author whereby I wrote a paragraph and realised I liked it so much that I have added it to my TBW list.

When you sit down to write a book, do you have the whole story mapped out or do you just start writing and see what comes out?

It is a bit of a mixed bag really. Often when I write I place a pen in my hand, or my fingers hover over the keyboard the story unfolds, I often think this is where my best writing comes from. I am instinctive in many things I do. I don’t tend to analyse, so that does create a problem for me when I need to write blurbs or synopsis. Some of the stories I am working on are created out of situations that have happened which allowed my creative mind to run riot with ideas and in those situations I do then map out the story.

Since your work is all about romance, which fictional character would you like to go on a romantic date with?

Years ago I read a series of novels by Anne & Serge Golon, a married couple who pen under the name Sergeanne Golon. The series is written about a woman called Angelique who is wild, adventurous, attractive, seductive and clearly fictional! It is set in France in the 17th Century under the rule of King Louis XIV. Angelique is forced to marry Comte, Joffrey de Peyrac, a man who is facially scarred. Initially, she fears him but grows to love him. I would go on a romantic date with the Comte de Peyrac in his home of Languedoc. Good food, a glass of wine or two and a stroll through the surrounding countryside. I do plan on visiting the picturesque and historical region of Languedoc, but I fear that the men of this age won’t be as exciting.

E-book or paperback:  Heart says paperback but reality is ebooks

Favourite word:  I don’t actually think I do!

If you’d like to check out Maria’s work (and I’d suggest you do), here is her website, her Facebook page, her Twitter handle, and her Amazon author page from which you can buy her books.  I’m sorry, I couldn’t get her phone number, so if you want to ask her out on a romantic date, you’ll have to find another way!

This interview was originally conduction for the blog Authordom; or there about.